In loving memory of Andy Clough who sadly died on 27th September.

You may also submit a personal tribute below and if you wish to make a donation in Andy’s memory, please donate to the Princess Alice Hospice who were amazing with the level of care and support that they gave.

The funeral service was held at 1pm on Friday 16th October at GreenAcres Chiltern. Due to limited capacity, the funeral was by invitation only.

Please make any donations to the Princess Alice Hospice

My cousin Andrew Clough was nice from birth! And he continued to be so for all his all too short 58 years. He was kind, thoughtful and had a fabulous sense of humour. He will be most sorely missed, by his family and by his friends across the world. 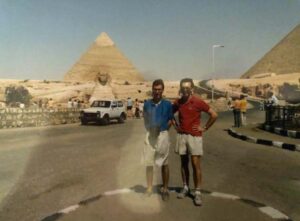 A lovely, warm, kind and funny man, who was a friend as well as a cousin growing up. He was someone who always faced challenges in life with amused equanimity and a light touch. He will be sorely missed by those of us who were privileged to know him. xx

My earliest memory of Andy is of our first day as trainees at Benn Publications in October 1985. There were about eight or nine of us in the classroom and before we’d had a chance to get to know each other, our tutor Val Williams asked if anyone needed a permit for the staff car park. All heads swivelled when a solitary hand went up and it belonged, of course, to Andy.

Once we’d recovered from the shock that one amongst our number should be grown-up enough to have a car, we quickly learned that it was far more than just a means of transport for Mr Clough. Over the decades the models he drove became ever more luxurious but the man who so loved being behind the wheel remained the same: a blunt, straightforward, loyal and thoroughly dependable friend.

I thoroughly agree that one of his great defining qualities was his sense of humour. That was fortunate for me when, as his lodger in Craven Hill for a while, I managed to carry a plate dripping spaghetti bolognese sauce all the way from the kitchen into the dining room, via the previously pristine living-room. Somehow Andy managed to see the funny side of that and in Martin, of course, he found somebody with the same humour and sense of fun which always made it so nice to see them together.

One of the last times I saw Andy was at a lunch with him and Martin at Petersham earlier this year, and then more recently at home. Both times, I came away struck by how much he’d asked about me, rather than talking about his illness and, above all, by how much we’d laughed — just as we did all those years ago at Benn’s. I’m very glad to have known him.

Andy and Martin moved next door to us and we spent many years as neighbours and friends. Andy put up with our cats creeping up to his bedroom and sleeping on their bed and making use of their garden for all sorts of activities…. some less pleasant than others! Andy was the funniest , joyful man … he made us laugh and could tell such funny stories… When Martin and Andy married, it was one of the best evenings we spent with them ….. although my husband could not remember too much… except waking up on our kitchen floor minus his false teeth!!! Martin… we feel for you… to lose someone as special as Andy is truly a tragedy. Andy….. We will never forget you xxxx

I found this poem again, which my niece Victoria read at my Mother’s funeral. I would have read it for you Andy. It’s called ‘By the River, by Anna McMullan.

I was tired
When we found this place,
The quiet place by the river,
Where the sun shines through the willows,
Dappling the dark water
With green and gold.

I thought:
This is the end, this is peace.
We will stay by the river;
We will listen to its soft music
And watch the deep flowing.
The whispering leaves will be silent,
The golden shadows will deepen.
The river will rise and caress us.
Gently it will rise and embrace us
And bear us away.

Joyfully
I tried to tell you these things
But I was alone by the river.
A cold wind shivered the willows;
Slowly a leaf twisted down to the water
And was carried away.