In loving memory of Richard Power who sadly passed away on 27th June.

The funeral service was held on Thursday 29th July at St Mary’s University Chapel, followed by the burial at Teddington Cemetery and a reception at The Petersham, Richmond. A video recording of the service is shared below, along with personal tributes.

In lieu of floral tributes we invite you to donate to our chosen charity Cure Leukaemia.

Dick was not only my brother in law he was also a great pal. Whenever we met or spoke on the phone you could be sure of some great craic. He was so intelligent, he knew something about most things we talked about.
Veronica and I have so many fond memories of Dick. One I recall was at our wedding reception of Dick who after a Guinness or two sang Danny Boy. It was a show stopper. Another one was when he and Pat took us on a grand tour of Ireland. one day Pat Veronica and I went out for the day and left Dick to rest for the day. When we got back we found that Dick had purchased a tin of paint and painted all of the grey stones either side of the drive and up to the cottage a brilliant shade of white. Even though he is no longer with us the memories he helped to create will stay with us for ever. R.I.P. Dick. God bless. 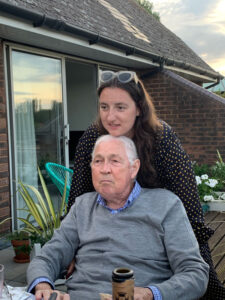 I am trying to Remember you and let you go at the same time.

An Incredible Father Grandfather and Husband. What an indelible stain you are leaving in all of our lives and in all of our souls.

Thank you for all of the many many I remembered acts of kindness and of love.

My brother-in-law Dick…. on the 1st of every month you would try and beat us all by sending a “RABBITS “ text..missing them already
The 1st of each month I will always think of you..
Your early morning singing..that woke everyone up …when you stayed with us or us with you !!
The time when you had jet lag… you came straight to our house for some occasion… you got up at 4.30am and went out… got stopped by the police… you told them you were off to the Lady of the wayside for mass…they laughed when they told you what time it was… I locked the front door the next night incase you did it again….
Your funny sayings….
ohmygodlywoddlytoddlyboddly.
And snackywhacky was lunch…
Cuppa tea Trisha… cuppa teeeeee Trisha…was so annoying we made you a cup of tea just for some peace., while you sat there sniggering as you had got what you wanted…
but the deal we had.. no one ever found out… cup of tea lizzy with two winks… ment a big mug full of Guinness…what fun we had while we drank Guinness all night and Trisha and Kev couldn’t understand why we were acting so daft ….well you were far from daft …I remember you saying a teacher gave you a book and told you to go home and read it..as he could see you had potential… you said he saved your life… as you continued to read and read and read … you were so intelligent… caring …and such a great sense of humour… we have had a few tears over the years but mostly fun….a great loss to all who knew you … night night Dick ❤️ love Lizzy xx

In 1956 Dick decided on a change of career he came to stay with Liam (his brother) and I he got a temporary job at the Catholic school in Southampton as an assistant teacher,in the playground one day a little boy came up to him and said ‘Sir my knee is bleeding’ apparently you looked and said it will coagulate ! Always makes me smile . Pam x

I am a new-boy. I have known Dick for only thirty years.
In the nineties at London Underground as fellow civil engineers, he was my client.
In 2002 after he retired, he helped me build a basement under my house in Hammersmith. What he didn’t know about under-pinning wasn’t worth knowing. I certainly could not have done it without him.
And for the last 20 years we have shared an allotment near Chiswick Bridge. Green and fertile. He did most of the digging. We shared the talking, and seldom drew breath. Topics? Hong Kong. Freeman Fox. Latin doggerel, jokes about the Pope, Limericks, apothegms. I spouted Belloc, Betjeman and Carroll at him like a water-cannon; he was always appreciative and ready with some form of literary or anecdotal revenge.
Dick was a delight to work with; he could give orders, take orders, cooperate or act alone. He was seldom discouraged by problems and relished imagjnative solutions. Invariably ahead of the game, anticipating the needs of others.
Always warm, generous, lively and perceptive. His happiness was infectious. He will be sorely missed.

Goodbye Uncle Dick .. you were last of that remarkable Power family to arrive and now last to leave. You were much loved by them all throughout their lives and as your nephew I am honored to have known you and later Trish throughout your never boring expedition through life.Your personality was large and your acerbic observations on the world around you were always a source of much enjoyment. You have left many great images in your wake and the story , as told to me by my mother after a G n T or two , of your sisters , the chair and the broken nose ..which sort of defined your swarthy looks !, is just one whether accurate or not that lives very clear in my memory. Thank you for everything and I assure you that though you may be gone you will not be forgotten….